Hello, my name is Jorge Prieto and I am a rising senior at Lighthouse Community Charter School. When I first started Blue Stamp I had no background in electrical, mechanical or computer engineering but I really wanted to learn. My starter project was the Big Time Watch Kit and it taught me how to solder, which I had never done before. This really was a good starter project because I was able to launch into my RC tank with ease seeing as it required a lot of soldering. My tank comprised of one Arduino, one Arduino motor shield, two motors with gearboxes, and a battery box. It was controlled with a PS2 controller which was connected to the motor shield. It was really fun to build and drive. 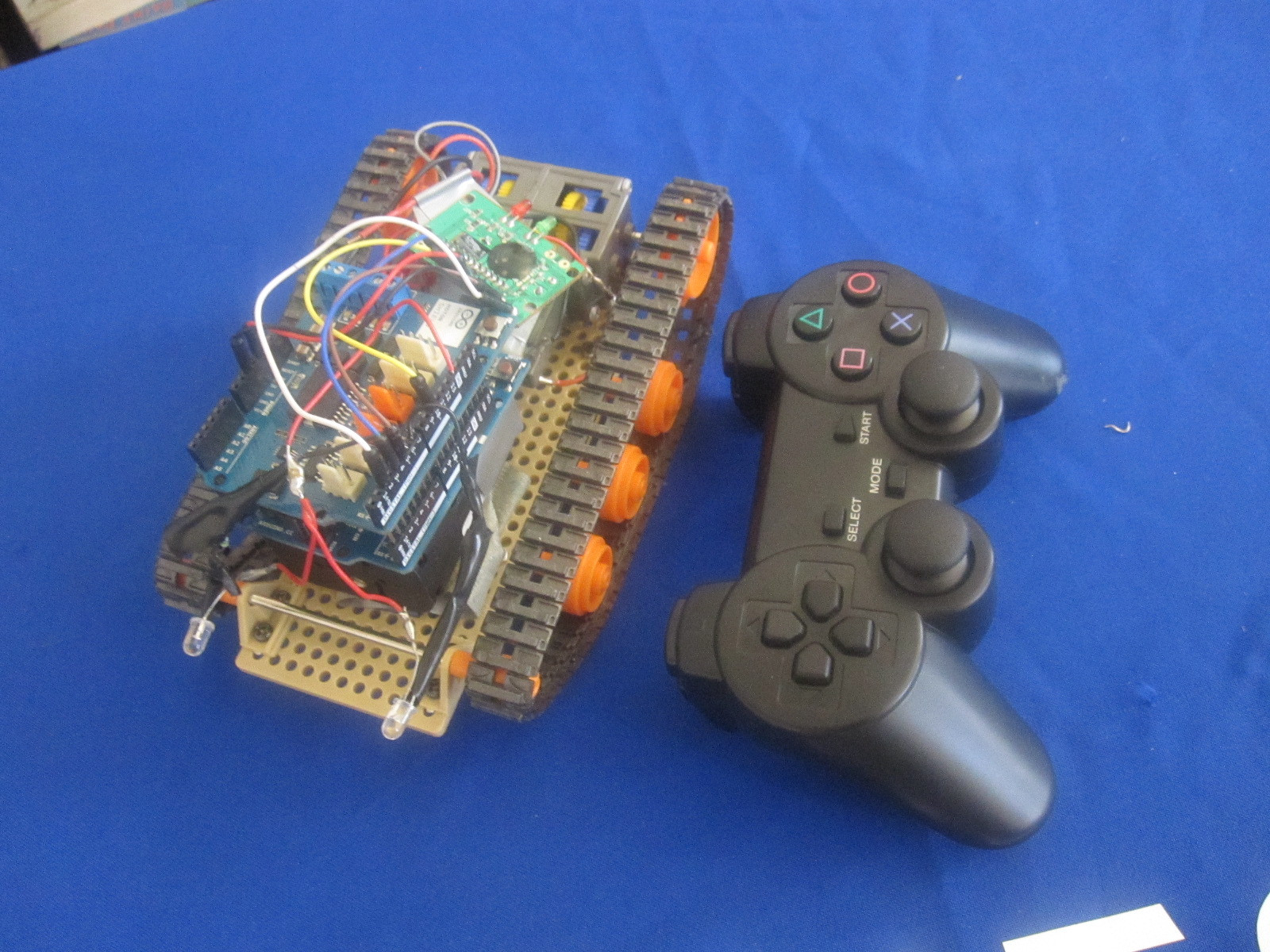 This is the link to my BOM
https://docs.google.com/document/d/1muFYkOgsHWSpdWd8XqLk_dINDzQ2iCvVG5t7SJ0ogW8/edit?usp=sharing

My code is also here
https://github.com/Jorgep2015/Robot-Tank-Code

Final Project: RC Tank Final Video
This is the final week at Blue stamp and I have successfully gotten my RC tank to work. After 6 weeks of working through various problems my tank was moving around the classroom at a quick pace. When I first started I was scared that I would have no idea what to do. I finally got the tank to work after realizing that the controller I was using was broken. All it took was for me to break it completely. With the new controller the tank no longer nudged forward but actually drove. However, I was still having trouble with one track and Nathan suggested changing the pins around and it worked. I now have a fully functional tank.

Final Project: RC Tank Milestone 3
I am Jorge and this is an update on my RC tank. So far the autonomous code has been immensely helpful. I was able to use the motor shield control from the autonomous code and applied it to the RC control code. That allowed for the PS2 controller to actually communicate with the tank. However, now that I have solved the communication problem another problem has risen. Whenever I press L1 or R1 to make the tank go forward it only nudges forward a fraction of an inch. Ankita has been helping me go through the code and the wiring but we can’t find the problem. I believe that what is happening is that the motors only run for the time that you press the buttons to go forward to it most likely is a coding problem. Hopefully it will be something easy to fix.

Final Project: RC Tank Milestone 2
I am Jorge and my final project is the RC tank. In my second milestone I began to work with the coding aspects but I quickly encountered a problem. The problem was that I had ordered the wrong motor shield for my RC tank and I had gotten the Arduino motor shield instead of the adafruit motor shield. I ended up deciding to work with it. I was having a really difficult time trying to get the telecommunications code to function at all. After various failed attempts I decided that I should at least get the tank to move. I was able to find an autonomous code which I modified to function with my tank. I hope that I will be able to use the autonomous code I found to get my RC code to function. That way I will be able to use my PS2 controller to to control my tank.

Final Project: RC Tank Milestone 1
I am Jorge, and my final project is the RC Tank. In this first milestone I finished the mechanical and electrical aspects of my RC Tank. Basically what this means is that I successfully put together the Chassis of the tank and all the wiring. The hardest part of this first milestone was actually not the building of the actual tank but of it’s motor and electrical systems. The reason the motor was difficult to build was that the instructions were not in English and the Tamiya motor has lots of small bits. I actually had to take it apart because I had put two gears in the wrong places and it was preventing the gearbox from functioning properly. Then I put in the DC motors which I then connected to the motor shield which was connected to the Arduino Uno. Without the motor shield the arduino Uno would not interact with the motors. Then I had to take apart the PS2 dongle which took a while seeing as it would not open. However once I got it to open I was able to quickly plug all the wires together and I was done with my Electrical and Mechanical systems.

Starter Project: Big Time Watch Kit
I am Jorge, and my starter project is the big time watch kit. The main components of the watch kit are two capacitors, a resistor, a crystal oscillator, and an ATMega328 micro controller. Firstly, their are the capacitors which are measured in farads and are basically batteries. The difference between a capacitor and a battery is that the capacitor releases energy all at once and it doesn’t make its own electrons, it simply stores them. Secondly, we have the resistor which is also another important component and its unit of measurement is ohms. It basically dissipates energy and only lets a certain amount pass by. They are color coded so finding their resistance is not difficult at all. Third is the crystal oscillator and it is what gives the watch its accuracy and basically emits an electric signal with a precise frequency. Fourth is the ATMega328 micro controller and it is basically what controls the watch. Lastly, you have the batter holder with the lithium battery and the button to actually turn on the display. This all goes on the board to create the watch.