Hi, my name is Irving. I am a junior at Kipp Denver Collegiate High school. For my starter project I decided to build a laser target. For my intensive project I built an RC robot tank. A little bit about me is that I play sports and that I am fluent in two languages and currently learning a third. 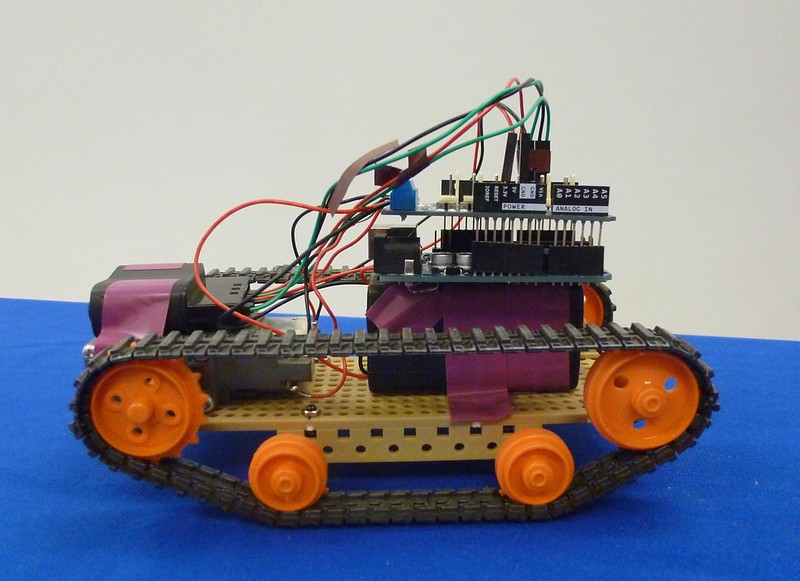 I am happy to say that this is my third and final milestone. I finally got the robot to work. There were a few obstacles like making the robot stop when nothing is being pressed or trying to keep the controller on while in motion but all of that is now fixed. My PS2 controller is now fully functioning and my intensive project is now completed.

This is my second milestone and the project I have been working on is the RC robot tank. The only difference between this milestone and the last has to do with me adding a PS2 controller. My robot is now under my command for the most part. Some of the problems I have encountered have been mostly with the PS2 control. So what basically happens is that my robot is working fine but my control tends to turn off. This creates a huge problem because my robot ends up following the last command I gave it and it ends up not following any of my future commands until reconnection is successful. So for my third milestone, I want to have a controller that fully functions and my robot is 100% done.

This is my first milestone and the project I have been working on is the RC robot tank. My robot consists of a motor shield, an arduino, two DC motors and a gearbox with gears, and batteries. It all begins with the gear box. The two DC motors are inserted in the gearbox and the purpose of the gearbox is to reduce the speed given from the motors towards the wheels. The purpose of the arduino is to send the commands from the code to run the robot. The motor shield executes the program by getting power from the batteries. My next milestone will incorporate a PS2 controller to control the actual robot.

Im Irving, and this is my starter project, a laser target. my project consists of different pieces. It uses light emitting diodes (led’s). It uses photo resistor which reduces the resistance and converts the light energy into electricity. It uses PNP transistors to turn on the led’s. It uses resistors to slow down the electrons so that the led’s wont overheat. It uses a variable resistor. It changes the resistance by turning the knob. It also uses a diode to allow the current to flow through one direction. All this combined allows the led’s to light up.