The hand gestured controlled car contains two parts, the glove and the car. The Glove includes four flex sensors. The different combinations of the flex sensors will determine which motors will move. This will make it seem like the car is controlled by my hands.

Working on this project, I learned a lot about engineering and myself. I learned three different aspects to engineering which were electrical, software and mechanical engineering. I learned a lot about these three types of engineering because there was no clear documentation on how to build my project so I had to research everything that came with my project and figure out how to combine all the parts into one working project. I spent the first two weeks researching this and experimenting different ways to wire everything but it was also very frustrating because nothing went my way. But through these six weeks, I learned to persevere through hard times and also to research everything I have and Google is a very good friend.

I finished my final milestone and my project, the Hand Gestured controlled car. It includes two parts, the NRF communication and the car chassis. Basically the flex sensors are sewed to a glove and connected to an Arduino Nano where the NRF transmitter is also wired to. The Nano will read the change in resistance and send the variables over to the NRF receiver connected to the Arduino Uno where the servo and DC motors are connected to.(Figure 1). The Arduino Uno will then use the variables and determine which action to take.

Figure 1: Connection between the NRF transmitter and receiver

The NRF24L01 is a wireless receiver and transmitter and the transmitter sends over code and data to the receiver which then reads it and operates on the data sent over. They operate in the frequency of  2.4 GHz. In my code, the flex sensors have their own variables, so four in total. The NRF transmitter, connected to the Nano, will send the different variables of the flex sensors over to the NRF receiver which is connected to the Arduino Uno. Since the servos and the DC motors are also connected to the Uno, the Uno will receive which flex sensors are bent through the NRF communication. The Arduino Uno will then decide what to do with the servos and DC motors.  The car chassis contains many parts all cut out from a huge aluminum sheet and connected using brackets. Duct tape was used to wrap around the chassis to prevent the Arduino Uno and the motor driver to short.

This specific motor controller is a L298N and the motor drive controller has four inputs that are connected to the four inputs in the H-bridge in the L298N. An H-bridge is a circuit that changes the direction of the motor spinning. There are four switches in the H-bridge as shown in figure 3. These switches are what determines the direction in which the motor spins. For example, if S1 and S4 are turned on and S2 and S3 are turned off, the motor will spin to the right. There are two inputs for each motor and a pin to enable each motor (figure 4). These 6 pins are connected to digital pins on the Arduino Nano. Signals will be sent from the Nano to the motor driver, and then to the motor terminals where the motors are connected. After figuring out how to turn the motors by itself, next came the flex sensors. I had to somehow make one motor turn when a flex sensor bends. I took all the code I had for flex sensors, motors and servos and took parts of different codes and combined them into one. Refer to milestone one for more information on how flex sensors work.

This can be seen in the code:

This tells the Arduino Nano to turn on switches 1 and 3  and this will make both motors move in one direction.

Figure 2: Two pins on the flex sensor, P1 for power source and P2 for ground

There were many parts to the code. For example, there had to be a code to include two servos instead of one and it had to include the two flex sensors. The code is:

My starter project is the motion alarm from Sparkfun https://learn.sparkfun.com/tutorials/sparkfun-inventors-kit-experiment-guide—v40/circuit-3c-motion-alarm. This project uses light, motion and sound to either scare or alert others when it comes within 10 inches of the motion sensor. It can be used as many things from an alarm that scares your cat away or it can also act as a room alarm.

There is a motion sensor in the form of distance. If it senses an object within 10 inches or less, the light changes from green to red, the servo starts moving, and the piezo buzzer starts making noise. The motion sensor is ultrasonic. It works like echolocation. There are two parts: 1) a transmitter, the part that sends out the waves and, 2) a receiver, the part that receives the waves after it bounces off an object. See figure 1 for a diagram of how the distance sensor works. A servo is a motor with three wires sticking out of it. One is for power, one is for ground and one is for control inputs. A piezo buzzer is a vibrator that makes a loud noise. After we put everything on the breadboard, all that is left is to add the code to the Arduino Uno R3. An Arduino Uno R3 is a microcontroller. In a microcontroller, we can input code for sensing a controller a digital system. The code basically tells the Arduino that once the ultrasonic sensor receives something, the light changes from green to blue, the piezo buzzer starts vibrating and the servo starts moving. 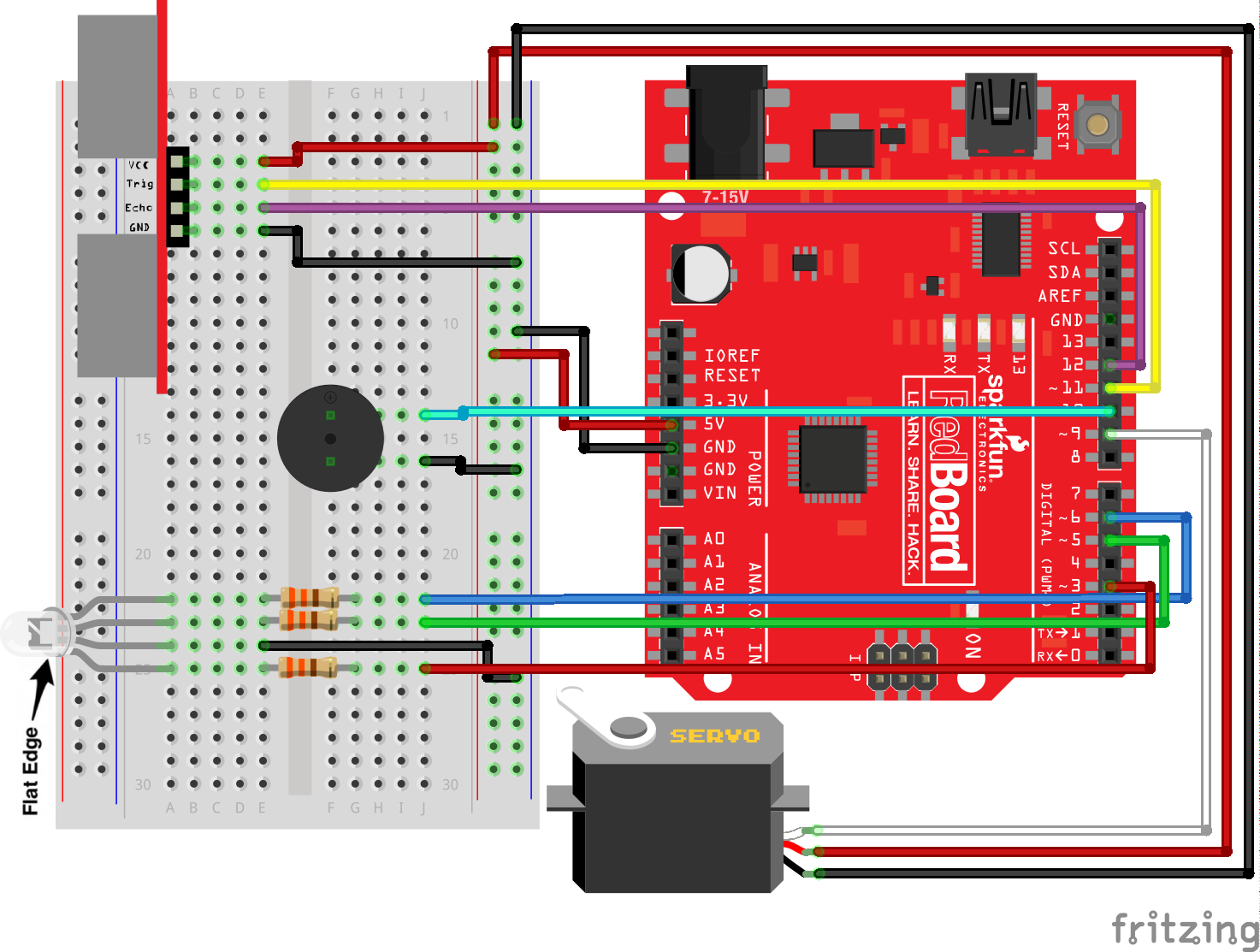 Figure 1: how a Ultrasonic Sensor works